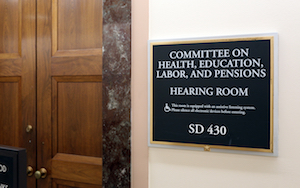 March 29 was a busy day on Capitol Hill—in addition to the House of Representatives approving SECURE Act 2.0, the Senate Health, Education, Labor and Pensions (HELP) Committee held a hearing on improving retirement security.

In the hearing, titled Rise and Shine: Improving Retirement and Enhancing Savings, Senate HELP Committee Chair Patty Murray (D-WA) opened by noting that she and the Committee’s Ranking Republican, Richard Burr (NC), are working on bipartisan retirement security legislation that they aim to put forward later this spring.

“When it comes to the issues we are discussing today, it’s clear there is a lot of bipartisan interest in enhancing Americans’ savings, improving their retirement planning options, and strengthening their financial security. And I’m hopeful today’s hearing will help me, Senator Burr, and our colleagues on both sides of the aisle to put together a package that builds on the bipartisan SECURE Act we all worked to pass in 2019, and the bipartisan legislation the House has been developing with even more common-sense steps to make our retirement system work better for families in Washington state and across the country,” Murray stated.

She also raised the issue of improving transparency around lump-sum offers and fee disclosures, pointing to a recent GAO report she requested finding that 4 in 10 people in a 401(k) plan incorrectly believed they were not paying any fees and that many participants do not understand the existing disclosures. Murray also cited a second GAO report from 2015 recommending that the DOL improve oversight by requiring plan sponsors to notify the agency when they implement lump sum windows, and coordinate with Treasury to clarify guidance on the information sponsors provide to participants.

The hearing included testimony from:

Petros Koumantaros offered testimony on the impact of the COVID-19 pandemic on DC plans and the need for participants to have access to emergency savings, along with the need for improved worksite financial planning and increased financial education. He also offered views on what he believes are the best ways to expand DC plan coverage.

“While current legislation allows certain retirement plans to offer financial hardship withdrawals and participant loans, such options are not always suitable for true financial emergencies,” Koumantaros testified, noting that hardship withdrawals are limited in scope and can bring with them an early withdrawal penalty in addition to regular income taxes on the distribution. Similarly, participant loans require repayments to commence soon after loan origination, which he noted can be challenging for those facing financial emergencies. Koumantaros called on Congress to consider financial emergency savings legislation to provide workers with ready penalty-free access to such savings that could be part of participants’ retirement plan accounts or separately tracked “sidecars” to participant accounts.

In the area of expanding coverage, Koumantaros suggested that Congress consider creating a Universal Coverage Automatic Safe Harbor (UCASH), which would be a single employer 401(k) plan targeted to small employers, with the goal of broadening coverage and providing meaningful retirement benefits, while preserving administrative simplicity. Koumantaros cited data from the Bureau of Labor Statistics showing that among employers with more than 100 employees, 87% of workers had access to retirement benefits; yet among employers with fewer than 100 employees, only 58% of workers had access to retirement benefits.

In the area of lifetime income options, Chittenden noted that TIAA strongly supports the Lifetime Income for Employees Act (H.R. 6746) introduced by House Reps. Don Norcross (D-NJ) and Tim Walberg (R-MI), to amend the DOL’s QDIA regulations to allow a default investment to include a guaranteed lifetime income component with liquidity features. “Access to guaranteed lifetime income through a retirement plan is critical, and we believe enhancing access to the best versions of these products throughout the entire system is foundational,” he testified.

Among Chittenden’s other recommendations are to allow for 403(b) plans to be offered as MEPs/PEPs; further expand access to plans for long-term part-time employees; improve the Saver’s Credit; encourage employer matches based on student loan payments; and expand automatic plan features.

Ida Rademacher of the Aspen Institute testified that, despite the power of the retirement savings system for those who are able to use it, there are wide gaps in access, particularly for households of color, women and low-income households. As such, she suggested that increasing coverage must be a priority—and that coverage must include access to automatic enrollment. “When workers have access to payroll deduction-based retirement programs, they are 15 times more likely to save. Offer automatic enrollment and they’re 18 times more likely,” Rademacher stated.

Among other suggestions, Rademacher contended that allowing for automatic re-enrollment into retirement savings plans is a promising policy that would build on the success of automatic enrollment. Expanding the market for multiple employer plans or pooled employer plans to include more workers, such as those at nonprofit organizations, could also move the needle on worker access to workplace retirement savings plans, she noted. Rademacher also addressed the lack of portability with plans, the need to create lifetime income streams in retirement for all, and addressing emergency savings as areas that could be improved.

WISER’s Cindy Hounsell further dug into the challenges that women face in saving for retirement. “Lower wages, gaps in earnings, and part time employment translate into less retirement savings and most likely lower Social Security benefits,” Hounsell explained. “The fact that women generally live longer than men makes it harder since they need to make their savings last longer and to avoid mistakes.”

Women do want to take control of their retirement, she noted, including learning how to overcome the knowledge gap and the investment gap, and how to spend down and protect their savings. As such, Hounsell described three areas that could help alleviate the challenges: including emergency savings accounts, targeted retirement literacy, and auto-portability to help prevent workers who change jobs from cashing out their retirement savings.